The Guelph Youth Music Centre (GYMC) announces the retirement of its Executive Director, Gabriella Currie-Ziegler, after almost 11 years of service. Following a long career in arts management, Currie-Ziegler will retire on January 30, 2023. 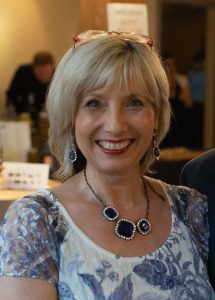 “The GYMC Board of Directors wishes to thank Gabriella for her outstanding leadership. During her tenure as Executive Director of the Guelph Youth Music Centre, she expanded the arts programs available to our students and established the GYMC as a popular venue for concerts and community events. Gabriella has navigated the last few pandemic years with finesse and leaves the GYMC on a solid financial foundation,” commented Liz Sandals, GYMC Board Chair.
In announcing her retirement to the Board of Directors on June 27, Currie-Ziegler expressed her gratitude to the board, staff and volunteers.

“As of January 2023, I will have led the GYMC for almost eleven years, and it has been a privilege. My time with the GYMC has filled me with a sense of purpose and belonging that none other could. Working alongside so many dedicated, caring and talented people as we fulfilled our mission to the children and youth of Guelph has been an honour. I am proud of all we have accomplished together during my tenure. What a way to end my professional career!”

Currie-Ziegler has led a team of staff and volunteers with professionalism, inspiring leadership, passion and a positive outlook since 2012. She has been instrumental in successfully acquiring many grants to support programs, infrastructure, contract roles, administration, and marketing. She has also worked hard to create partnerships with community leaders and businesses to support the wide range of events and programs at the GYMC.

The annual Medieval Festival, KnightsFest, held on Family Day in February, has been a particular highlight during Currie-Ziegler’s tenure. Sponsored by TD Bank Group, the event sees hundreds of visitors from Guelph and surrounding areas participate in displays, costumes, games, activities and entertainment, all to the theme of the Medieval and Renaissance eras. It’s a popular free event for the GYMC, which hopes to bring it back for its sixth year.
Many world-renowned musicians have performed at the GYMC over the past 11 years, which Currie-Ziegler has played a large part in facilitating.

The GYMC also underwent a re-brand in 2014-2016, funded by the Ontario Trillium Foundation and included many projects, such as a new logo, tagline, website, brochures, signage, stationery and many other items. The re-brand brought the GYMC to the next level with a fresh and professional look. With her guidance, dedication and support, the GYMC is a leader in community arts in Guelph.

As with most non-profit organizations, the pandemic years have been challenging for the GYMC. Currie-Ziegler made it her goal to ensure that it emerged from the pandemic even stronger than ever and accomplished just that. Many programs are set to return in fall 2022, along with some exciting new ones.

About the GYMC
Established in 1992, the GYMC is a not-for-profit organization dedicated to education, enrichment and fostering the development of youth through music and the arts. The unique facility officially opened its doors in September 2001 after six years of renovations. The GYMC is an exciting cultural hub for children of all ages and backgrounds in the community. Through a variety of programs, provision of space to partner organizations and outreach into the community, the GYMC enriches many lives. For more information, call 519-837-1119.