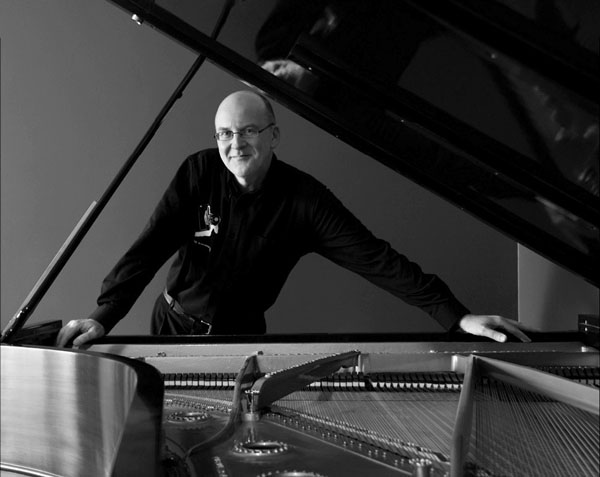 Born in Oakville Ontario in 1961, raised in St. Catharines, John Sherwood started his formal training at the age of five. His formal (classical) piano training came entirely in the form of private instruction by several teachers. As many of his classmates listened to popular music on the radio, John was being exposed to a variety of music at home. His brothers and sisters were all playing the piano as well as other instruments and his father, accepting John’s fading interest in classical music, presented him with the challenge of playing jazz on the piano. This indeed was the only form of music that would truly challenge John to maintain the level of technique he had developed. It was John’s older brother who gave him the first Oscar Peterson recording in 1978. This would mark a whole new obsession for the music. John began transcribing what would be many pages of Peterson’s work from albums. Few people have attempted this as it presents technical hurdles that few can overcome, not to mention the many hours of work listening, writing and analyzing. Today John Sherwood has his own sound. He was able to look beyond the blinding technique and blistering tempos and realize what makes any piano player great: Touch. The way the note is articulated is what makes it special. “I’ve merely scratched the surface on a few areas of Peterson’s work, but those few areas dominate my way of thinking about the piano. Always. Even when I’m not playing in that style. The classical background is essential in developing touch, tone and technique. In jazz, it’s the rhythm. Once you have that rhythmic concept, the rest falls into place.”

Terry Clarke is a Canadian drummer (originally from Vancouver). His natural rhythmic aptitude was obvious from an early age, and at the age of twelve, he began studying formally with the noted drum teacher and author Jim Blackley who was to remain a primary and ongoing figure in Terry’s development as a musician.

In 1965, Terry moved to San Francisco to work with John Handy III. He performed with him for the next two and a half years, during which time the Grammy nominated recording, Live at Monterey Jazz Fest(Columbia, 1966) was made. Following the John Handy experience, Terry began building his reputation for versatility by joining the world-famous pop vocal group, The Fifth Dimension. At the time, they were at the height of their popularity, and Terry traveled and performed extensively with them throughout the U.S.A., Canada and Europe. Terry left The Fifth Dimension in 1970, and re-located to Toronto.

For the next 15 years he played an abundance of jazz in all styles, as well as being in demand in Toronto’s considerable studio scene. Countless television shows, jingles and recording dates were Terry’s mainstay, as well as touring Japan and Europe with noted jazz guitarist, Jim Hall and piano great, Oscar Peterson. Terry Clarke is well-known as a founding member of the world acclaimed big-band, Rob McConnell’s Boss Brass. For twenty-five years he recorded and toured with the band, helping to define it’s remarkable sound. In 1985, Terry made a bold move to New York to pursue an exclusively jazz career. During his stint there, he worked with The Toshiko Akiyoshi Jazz Orchestra, The Joe Roccisano Jazz Orchestra, Jim Hall, Jay Leonhart, Helen Merrill, Marvin Stamm, Bob Mintzer, and Mark Murphy (among others). Terry Clarke has recorded well over 300 albums with various jazz artists including Jim Hall, Oscar Peterson, Rob McConnell, The Singers Unlimited, Frank Rossolino, Toshiko Akiyoshi, Lew Tabackin, Freddie Hubbard, Jay McShann, Buddy Tate, Emily Remler, John Handy III, Ed Bickert, Helen Merrill and Roger Kellaway. Terry is a familiar face at jazz festivals in Europe, Canada, Japan and the U.S. After fifteen years of living and working in New York City, he re-located to Toronto with his wife Lesley, and their two young sons, Kristopher and Kyle. In October of 1999, Terry re-united with Rob McConnell to help form the Rob McConnell Tentet, an exciting newly formatted group comprised mainly of charter Boss Brass members, and fueled by the brilliant writing of Rob McConnell. This new group has received rave reviews for their “live” performances, as well as a GRAMMY nomination and a JUNO award for their self-titled debut CD on theJustin Time label.

As a jazz educator, Terry Clarke is currently an adjunct professor at The University of Toronto, and In January of 2002, he was honored as Drummer of the Year at the first annual Canadian National Jazz Awards. Terry Clarke has also been recently named as a Member of the prestigious Order of Canada.

Pat Collins was raised in British Columbia and began taking piano lessons at the age of six. At the age of thirteen, he turned to the electric bass. Pat continued playing electric bass throughout high school, forming a trio with pianist/saxophinist Phil Dwyer and drummer Rich Cave. The trio received many accolades, performing at many music festivals across Canada.Upon completing high school, Pat began learning the acoustic bass, which was a natural progression, given that jazz was the musical focus in his life at that point. After finishing college, one of his teachers, Collin MacQuarrie, arranged an audition for Pat with the renowned vocal jazz arranger/clinician/teacher Phil Mattson, and in the summer of 1986, Pat toured the United States with the Phil Mattson Singers, performing concerts and doing clinics. Upon completion of his tour with Phil Mattson, with the assistance of the Canada Council for the Arts, Pat attended the Berklee College of Music, in Boston, Ma. While at Berklee, Pat had the opportunity to study with bass with John Rapucci, Dave Clark and Bruce Gertz. Pat’s first big “break” in Toronto’s jazz community came when Moe Koffman asked him to join his quintet. Pat was thrilled with the opportunity to play with Moe, as well as the other members of the band, Ed Bickert, Bernie Senensky and Barry Elmes.

Since moving to Toronto, Pat continues to be very active on the Canadian jazz scene. He has performed with many great musicians including Rob McConnell, Oscar Peterson, Peter Appleyard, Diana Krall, Lorne Lofsky, Hugh Fraser, Oliver Jones, Denzal Sinclaire, Shirley Eikhard, and Ed Bickert, to name a few. Pat has also had the opportunity to perform with visiting American jazz artists such as Joe Henderson, Dizzy Gillespie, Jimmy Cobb, Lee Konitz, Ray Bryant, Bill Mays, Tal Farlow and Herb Ellis amongst others. After appearing on more than fifty recordings as a sideman, Pat recorded his first CD under his own leadership, entitled In The Moment, which was released in January, 2005. This CD, on the Cornerstone label, features some of Canada’s finest jazz musicians – Mike Murley, saxophones, Reg Schwager, guitar, and Barry Elmes, drums. In The Moment features all original music composed by Pat. Pat continues to live in the Toronto area, with his wife and two children, busy with playing, composing and teaching.